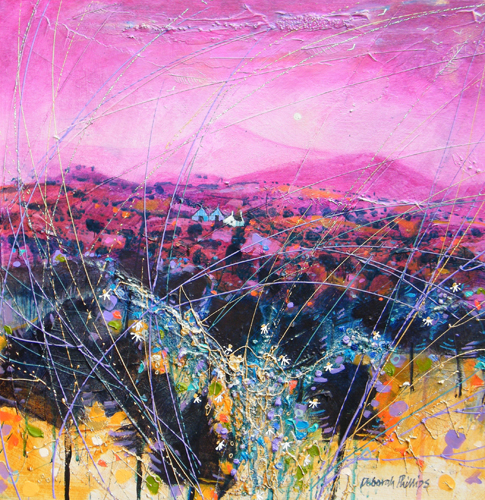 Deborah Phillips was born in Dundee, the daughter of well known Scottish artist, Douglas Phillips.
It soon became apparent that she would follow in her father’s footsteps.

She first exhibited work at the Royal Scottish Academy and the Royal Glasgow Institute of Fine Art at the age of 14. She attended Duncan of Jordanstone College of Art, Dundee and graduated with BA (honours) in 1987. Following graduation she took up the post of Merchandise Designer with the National Trust for Scotland and a similar post with Historic Scotland followed. Her design work has been featured in several leading women’s magazines and her paintings featured in International Artist, Artists and Illustrators, Picture Business and Art Business Today to name but a few. She also worked with an international art and craft materials company demonstrating products at leading art fairs.

Deborah now concentrates on painting in acrylics in her Dundee studio overlooking the Firth of Tay
and exhibits extensively throughout Scotland, England and Ireland. Her work can be found in corporate and private collections throughout the world.